First two pages in A is for Applesauce!

Here's the first two pages in the A is for Applesauce book. Too excited about it being so close to being released! 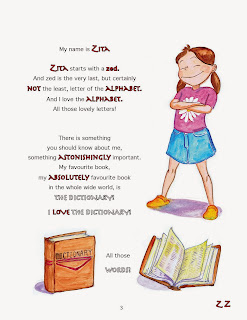 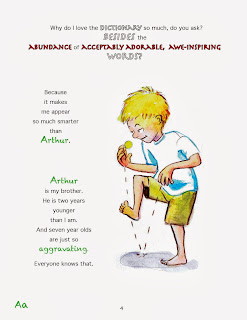 And, of course, the cover for the Wordplay book full of games and puzzles! 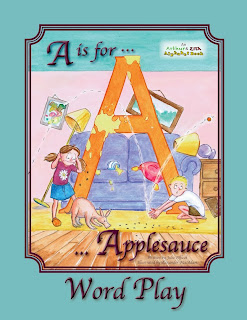 Posted by Unknown at Thursday, November 21, 2013 No comments:

A is for Applesauce

We are ordering the proofs for the book and also for the accompanying workbook, which is perfect too. My kids will love it! It's fun, with all the colours so bright. Now as soon as the proof is approved it will be for sale. So exciting!

B is for Bubblegum is 'almost' finished,  C is for  Calastrophe is being illustrated, and D is for........, well, it's been started anyway.

Hey, trust me, I am NOT wonderwoman. I'm also working on Zapped, the second in the Blurs series, and White Magic, another young adult novel, and another picture book series. But everything is getting wrapped up! And I can't wait to see how the pictures for the Teddy and I series are turning out.

But this post is all about A is gor Applesauce!

Love it! Hope you love it as much as I do!

Posted by Unknown at Tuesday, November 19, 2013 No comments:

Wow!
I gave The Blurs to a class to read and let me know what they thought.

They really let me have it! I was extremely impressed with every one of their comments. They was a synopsis, strengths and weaknesses - from all of them.

And most of them told me they had a couple of unanswered questions that I hadn't realized I didn't answer! These kids really paid attention to the book! I told you I was impressed! Their knowledge of books and what an author is responsible for............what readers expect..........These kids wanted more from me than I wanted out of most of the books I've read!

Each and every one of the comments were based on what they thought of my writing style, some liked it, some didn't. Some thought the book would be better if there was a girl character in it. Agreed. I think so too to make it interesting for boys and girls. But when I wrote the book, I wrote it specifically for my two sons, both whom despise reading. What is up with that?! Where did they come from? Oh, maybe because I spent too much time saying, "Just a minute. I need to finish this page." Oops.

In writing it for my two boys, I put it three main characters (one and his two friends) and no girls. They were in their 'I don't like girls' stage.............sadly that has long passed.sniff.....

I do have other middle-grade novels that have both boys and girls in it. Mostly girl main characters. Probably because I'm a girl. Yes? Easier to write about what you know.

I will be keeping their comments close for a while and learning from them. Imagine. I'm ??? this many years old and I'm still learning. From kids many years younger, no less, but they had a lot to say. I need to listen, especially because who am I writing for? Yup! Those same kids!

If I get the parents permission I will post some of the comments. Well, here's one of my favorites - part of it. I hope the kids got great marks for the hard work they did! Here's what one said his thoughts were:

Personal thought: I think that over all the book was pretty good. The whole time I was listening I just wanted to hear more about what happens later on in the book. After the book was finished I was thinking that the author should make another book to the series after the great ending.

Posted by Unknown at Wednesday, November 13, 2013 No comments: