Yes! I've finished the first Teddy and I!
Finally! Finally! Finally!
I uploaded, fought with the computer - which, by the way, won by a long shot.  It refused to work.
For about four days straight.
Sometimes I could get the internet to work, but not for long.  Internet Explorer was the first casualty.  It disappeared from my desktop altogether.  Lost in cyberspace, I guess.  I asked all my kids, "Who did it? Who? Who?" like an owl.  The culprit - the same dirty rotten soul that does everything around here.
"Not me."
Ever hear of him?
I have.  Much too often.
But losing that 'e' wasn't all that bad.  Until Google Chrome decided not to load too.  THAT was a problem.
If I only had as much free time to write as I spent on the phone, on hold and with the computer techs at Aliant...........
Who, by the way, are absolutely wonderful and patient when dealing with a computer moron like me, who needs every little step explained.
"What does a modem look like?"
Sigh.  Well, only the first time.  Now I remember.  Then they mentioned a router.
A what?
I could go on.  And on.  But I won't.  I'm almost as bad on computers as I am with directions.
So yes Teddy and I... Can't wait for Christmas is now on Amazon! So exciting!
And I did try to upload a Kindle version.
Well, maybe I'll just leave that alone for now.  Didn't turn out so well at all.
So for now, I will end my post without adding a picture of the cover - can you hear me calling "TINA!"
Not only for the cover, but to fight with her computer and figure out the Kindle............
She's stronger than I am!
And no, that was NOT whining!

Well I am still fighting with computers and time.  I'm losing, but its getting close!
I have the first of the Teddy and I series uploaded, and I ordered the proof.  I'm so happy with it! Now with a little tweaking it will be listed on Amazon this week.  I had a two year old test it for me, and it passed.  I was so excited!  He loved it!
Aaaaaaaaaaaagh.  That's what its all about.
And Soul Catcher, for the middle-grade readers, will also be out this week.
I should be so proud of me! And I am, but these two should have been ready at least a week (month?) ago.
Yeah, that's the computer and time thing again.
Today I had a million things to do.  My oldest son asked for a drive to school.  I said no, I didn't have time.  So what does he do?  Runs to the bathroom two minutes before the bus gets here.  Did he make the bus?  Nope.  Did I have to drive him?  Yup of course I did.
Did I fall for the bathroom trick? I don't think so! He doesn't like the first class, so on a day when I have half a million extra things to do, I wasted 45 minutes - yes I said 45!- waiting for him to 'eat' breakfast (normal days he won't eat breakfast), and I swear he chewed that bacon at least 75 chomps each teensy weensy bite  he took.
So I drove him.  And he missed the first class.
Gotta love him.  And I do.
Love all my kids.  Sure they drive me up the wall, but............
The rest of my day went just as quickly, but there's two things scratched off my list! 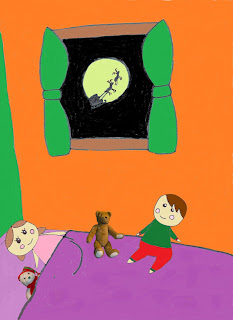 Here's the cover of Teddy and I... Can't wait for Christmas!  Minus the words, because I forgot (surprise! surprise!) to get my sister to send me the file.  Remind me to do that sometime......